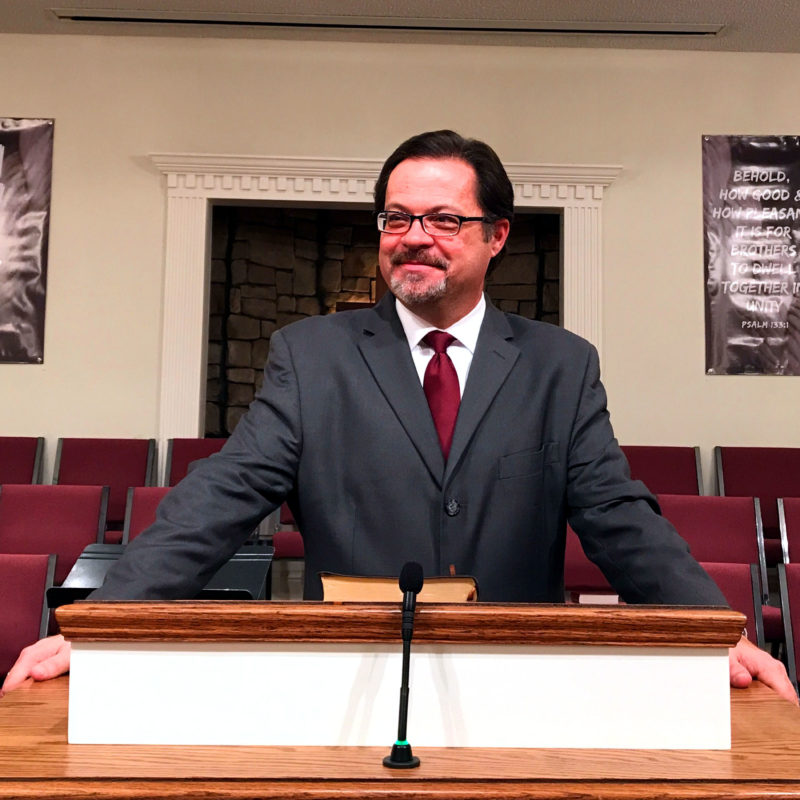 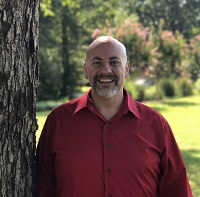 Oh that men would praise the LORD for His goodness,
and for His wonderful works to the children of men.

That all the people of the earth might know the hand of the LORD, that it is mighty:
that ye might fear the LORD your God for ever.
Joshua 4:24

Since its founding in 1964, Colonial Hills Baptist Church has stood as a lighthouse
for those searching for truth and a welcome refuge to believers in Christ.

“Seems God’s giving you your church Staggs. You can have the thousand dollars.”
Those words were spoken by a lady named Mrs. Hadden in the spring of 1964. It
was her money the Lord used to help with the founding of Colonial Hills Baptist
Church. Pastor Sam Staggs had a burden to begin a Bible-believing church in the
Greenville area of South Carolina. Coming from Phoenix Arizona with his family just
the year before, the Lord guided Pastor Staggs to a piece of property on Taylors
Road in the small town of Taylors right outside of Greenville. The church began
meeting on June 28, 1964 in an old, repaired house, and, on November 10th of that
year, fifteen original members of Colonial Hills Baptist Church met on four acres of
land that had once been part of the original two hundred fifty-acre Hammett Estate.
Those members were Miss Betty Howe, Mr. J.W. Jones, Mrs. Myrle Looney, Mr. and
Mrs. Chesley Hume, Robert and Ruth Hume, Mr. and Mrs. Hugh Ferguson, Helen
Havens, Glen and David Havens, Mrs. Shirley Blackwell, Mrs. Robert Warlick,
Reverend and Mrs. Sam Skaggs and their son, David. One year later, those original

members financially funded the building of what continues to be the main structure
of CHBC.

One emphasis that Colonial Hills Baptist Church has always had is an emphasis on
missions. In 1968, CHBC was supporting eight missionary families and a ministry
called Missionary Enterprises, which used the CHBC facilities as its headquarters,
was helping five missionary families with their prayer letters. Since then, ME has
grown to help more missionaries with the preparation and mailing of the prayer
letters.

Another ministry was started on September 1, 1972. Colonial Hills Christian School
began on the property of the church and held classes in the church building.

“Great is Thy Faithfulness” (Lamentations 3:23)

Over the years, the Lord has shown Himself to be faithful to CHBC. One specific
way was the provision of trusses for the gymnasium the church was building.
Pastor Skaggs had seen on the news that a building was being torn down in North
Carolina and he and the principal of Colonial Hills Christian School, Mr. Reece
Yandle, traveled to the site to buy the trusses. They were told the trusses were
being sent to Tennessee for another project. Pastor Skaggs said, “I’m afraid you
don’t quite understand. God told me that these trusses were for our Christian
school’s new gym.” Over the next few days, the Lord demonstrated His faithfulness
and the trusses were sold to CHBC for the amount of money the church had raised
for the gym project. Also, to see just how good and faithful the Lord was, Pastor
Skaggs sent for the 1933 blueprints of the building where the trusses had been
used for years. The assumption was that CHBC would need to make some changes
to the gym blueprints in order for the trusses to work. Much to the amazement of
all, the distance and spacing of the pilasters which would support the trusses were
EXACTLY the same as those already specified in the new gym blueprints! God had
made provision in 1933 for a need at Colonial Hills that would not arise for another
thirty-seven years. A sign posted in front of the gym showed the spirit of the
church about how God had provided. It said, “To God be the glory, great things He
had done!”

Sam Staggs served as pastor for a little over twenty years until he resigned in
1985. He left because he believed the Lord was leading him to work with the
Apache Indians on the Regeneration Reservation in Arizona. Over the years, the
Lord had taught Pastor Skaggs, “Where God leads, God provides.”

Except the LORD build the house, they labour in vain that build it.”

In 1985, Dr. Nicky Chavers became the second pastor of Colonial Hills Baptist
Church. He pastored the church from 1985-1998. Eventually, the Christian school,
Colonial Hills Christian School, which began in 1972 was changed to the Academy of
Arts and the Kiddie Academy. The school trained students to perform dramas as a
means of communicating biblical truths. In 1998, Dr. Chavers felt God wanted him
to serve full time in drama with the Academy of Arts and he resigned as pastor of
CHBC and moved the Academy to another location. Though the school closed on
the CHBC property, the wonderful facilities that remain—gymnasium, stage,
complete kitchen, and classrooms—continue to be a blessing for ministry at CHBC.

“Knowing Christ and making Him known!”

The current pastor, Dr. Michael Gray and his wife, Kellie, met on the campus of Bob
Jones University and were married in 1985. After Dr. Gray graduated from BJU,
God led him and Kellie to work in the ministry of Temple Baptist Church in
Lakeland, FL. After five years, God led them with their young son Brian back to
Greenville to complete a master’s degree in church history at Bob Jones University.

During those years of work and study at Bob Jones, God blessed Michael and Kellie
with two more children, Bradley and Bethany. Dr. Gray was open to whatever God
wanted him to do once he completed his degree, but he believed he would
eventually leave Greenville again to teach. However, God had a different plan. The
interim pastor of CHBC at the time, Pastor Jack Tillman, was interested in Dr. Gray
as a prospective pastor for CHBC. Dr. Gray agreed to come, and, after meeting with
the pulpit committee twice and preaching at the church, Dr. Gray was voted in as
the new pastor of CHBC in December 1997. He began to serve as pastor in January
1998 and began to serve full-time in May 1998 after finishing his master’s degree
at BJU.

While Dr. Gray has been at the church, the Lord has allowed the church to pay off
its debt and to upgrade the grounds and facilities as necessary. Also, a significant
milestone in Pastor Gray’s life came about on May 10, 2014 when he earned the
Doctor of Ministry Degree from Grace Theological Seminary in Winona Lake,
Indiana. In all of these things, the Lord has again shown Himself faithful.

In January 2004, Pastor Brian Fox began as the Assistant Pastor at CHBC. Along
with his wife, Mandy Martin Fox and their three children–Bradley, Justin, and
Lauren—they served faithfully and were a blessing to the church. Pastor Fox’s
primary responsibilities while at CHBC were to support the pastor as necessary,
oversee the youth ministry, and help with administrative duties. Pastor Fox served
until 2010, when he resigned believing the Lord was leading him to another
ministry.

In September 2013, Pastor Doug Brown began as the Assistant Pastor of CHBC.
Pastor Brown is married to Sherry Smith Brown who he met at Bob Jones
University. Pastor Brown and Sherry have two daughters: Rebecca and Sarah.

Before coming to CHBC as assistant pastor, Pastor Brown and his wife served
faithfully at CHBC before moving to Madawaska Maine for twelve years where
Pastor Brown served as senior pastor. Since coming to CHBC in 2013, Pastor
Brown’s ministry responsibilities have been to serve the pastor and to serve in an
administrative capacity by overseeing the various ministries of CHBC.

CHBC has been blessed to provide various ministries for all age groups. We have
Sunday school classes for all age groups. Also, we have a children’s church each
Sunday morning during the worship service and we have the Master’s Club which is
a unique ministry to children on Wednesday evenings.

Our Teen Ministry . . . ALIVE—Always Living In View of Eternity has its own Sunday
School class and fellowships. It is a great way to make new friends and to grow
together in the Lord.

We offer a college & career ministry that has its own Bible Training class on Sunday
mornings. Also, they have their own activities and fellowships throughout the year.

For the adults, various ministries are providing spiritual instruction in the Word of
God and fellowship with one another. We have Bible Training classes Sunday
mornings at 10am. Normally, we have three classes that are taught at the same
time and you can choose the class you would like to attend. Also, we offer Joyful
Ladies ministries which include Bible studies, prayer time, and fellowship. The men
also have a ministry called Men in the Gap that provides opportunities for spiritual
instruction and edification and fellowship.

As you have seen CHBC has been blessed over the years with faithful, loyal
leadership and people led of the Lord to serve Him and others. The dedication to
God’s Word, the beauty of the music service, the care for others who do not know
Christ, and the love of its members for one another have made CHBC a special
place for the glory of God.

Colonial Hills Baptist Church is a nice place to visit, but a better place to belong.

O magnify the Lord with me, and let us exalt his name together.

Knowing Christ and making Him known.

Colonial Hills Baptist Church is a great place to visit and a better place to belong.

and we hope to see YOU soon!

Talk with us
Hey there, thanks for stopping in.